Number One or Other

During my first year in High School I was relegated to the Junior Varsity baseball team. The next year I was determined to make the varsity. When the uniforms were passed out I was given #25, not one of my hoped-for numbers. When I asked the coach why I got #25, he replied, “Because we only have twenty-five jerseys to hand out.” In other words, I was player #25 to make the team. My wife was engaged to another guy before we became engaged. I was the second choice to be the Director of…

Influence-Peddling and the Church

Residents of Charlotte, North Carolina, were shocked by news that our mayor, Patrick Cannon, had been arrested by the FBI for influence-peddling. He was accused of using his position as mayor to solicit kickbacks from phony businessmen seeking his help in cutting through government red tape in getting their real estate projects approved.

Influence-peddling is nothing new, of course. People in positions of power throughout history have tended to use their…

“Faith Can Have Two Answers”

Reflecting on the Abraham story and his plight to sacrifice his son Isaac under God’s instructions, one has to trust God fully. In fact, trust may not be a strong enough word. For many of us we know this story and… 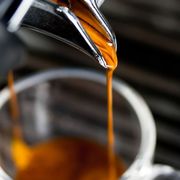 Philippians 1:14- “And many of the brethren in the Lord, waxing confident by my bonds, are much…

BOOK REVIEW: Timely Tips for our Trek Toward the Stars

Canadian Tom Cochrane wrote and Rascal Flatts famously sang that, “Life's like a road that you travel on” (Life Is a Highway).

Beloved American poet Robert Frost stated that, “Two roads diverged in a wood, and I— / I took the one less traveled by, / And that has made all the difference.”…

Many are talking about "making disciples" these day. But what exactly is disciple-making, really?

What disciple making, or discipleship, has become in most American churches is a program for becoming the best ‘Christian’ an individual can be, whatever that may look like.

I try to start most of my days in the Scriptures and praying.  I don’t hit every day but it’s a habit I feel is worth working on. I use a journal because it helps me to focus and I like to write out my prayers.  Reading, studying and meditating on Scripture is a rich time for me personally.  However, I also like to pray for others, but sometimes I’m not always sure what to pray for.

So, I decided, “why not pray for them what the Scriptures are teaching me.” …

Pastors: Too Much Credit, Too Much Blame?

When I first started in ministry, I had a policy to never preach the same sermon twice, even in different locations. But in recent years, I’ve taken a new approach: If God gives me a powerful message, I assume it’s likely to apply to multiple people and places. So why not preach it more than once?

But I’ve learned something shocking in the process: The power of my message often has as much to do with the responsiveness of the people as to my own prayer and preparation…

Are You an 'Aaron' Kind of Leader?

Taking a do-it-yourself approach to life? Or  trusting the Master?

“It is for men to choose whether they will govern themselves or be governed.”

George Barna, the founder and director of the Christian research group known as the Barna Group took his team and evaluated churches across America to determine how we’re doing with the task of making disciples. Based on his findings, he asserts, “Almost every church in our country has some type of discipleship program or set of activities, but stunningly few churches have a church of disciples.”1 Indeed, we have gradually set our eyes on the wrong…

Reflecting the 4 Faces of Jesus

Recently a friend and I were discussing some of the hot-button issues in our country today. We mentioned such things as gay marriage, abortion, healthcare, and income inequality, to name a few.

We all have our opinions on such things, of course. As believers, our opinions hopefully have been shaped by God’s principles and wisdom found in the Scriptures. In a world filled with moral relativism, we desperately need the Word of God as a plumb line to reveals our off-kilter values…

“The difference between duty and love is that the first represents Sinai and the second Calvary.”

“I don’t understand why I have to learn this stuff!”  If you haven’t heard your kids say this yet, just wait, school only started yesterday.  I was one of those kids.  I just didn’t care much for school.  I was too busy playing baseball, tennis and blowing up green army men with firecrackers.  School was not a highlight for me growing up.  Of course my lack of desire for learning spilled over into my spiritual life as well.  The Bible seemed boring and irrelevant as did most of church and…

Legacy of a Mentor

More than 30 years ago, I received a call from an elderly man named John Hunter. Someone had given him my name, and he said he hoped I might be able to answer some of his questions about the new things God was doing in the church.

I agreed to meet with him, and after that initial meeting John and I got together often. I learned that he had already known the Lord for more than 50 years—much longer than I had even been alive at that point. He didn’t flaunt his credentials, but he also…

Getting Our Roar Back

It seems most of us Christians in the United States today have become like domesticated lions. While we’re called to be kings of the jungle—ruling and reigning with Christ (Romans 5:17)—we’ve allowed ourselves to become tame and housebroken. Instead of being predators, striking terror in the princes of darkness, we’ve become mere pussy cats, a threat to no one.

Is anyone afraid of the church in America today? Does the devil quake when the saints of God gather? Are those who pollute…

We’ve all read the verses: "Do not fear, from now on you will be catching men” (Luke 5:10); “and that most of the brethren, trusting in the Lord because of my imprisonment, have far more courage to speak the word of God without fear” (Philippians 1:14); and “perfect love casts out fear” (1 John 4:18b): There are, of course, more references, but these will do for what I’m about to say. In my short walk I’ve heard statements like, “I’m too shy”, “I’ll be criticized… Continue

Morality, or Spirituality, or Both?

Over the years, I’ve had friends who had strong spiritual convictions but low moral standards. The results of such lifestyles have been displayed widely in the media. I fear what has been revealed in the spotlight is only a fraction of what has been practiced in the shadows. More recently I have developed friendships with those who have strong moral beliefs, but not much spirituality. Must it be either/or? Can it not be both/and? Jesus found a way to incorporate both spirituality and…