Rediscovering Sabbath - Winds Across the Water

24 The water prevailed upon the earth one hundred and fifty days.  8:1 But God remembered Noah and all the beasts and all the cattle that were with him in the ark; and God caused a wind to pass over the earth, and the water subsided.

Hurricane Irene arrived in New England yesterday.  In my little corner of the world it was entirely uneventful, not like in some parts of New England that experienced tidal surges, heavy rains and wind accompanied by river flooding.  We were mostly on the windy side of the storm.  And as you can see below, Irene produced tiny little whitecaps on our quiet little lake. 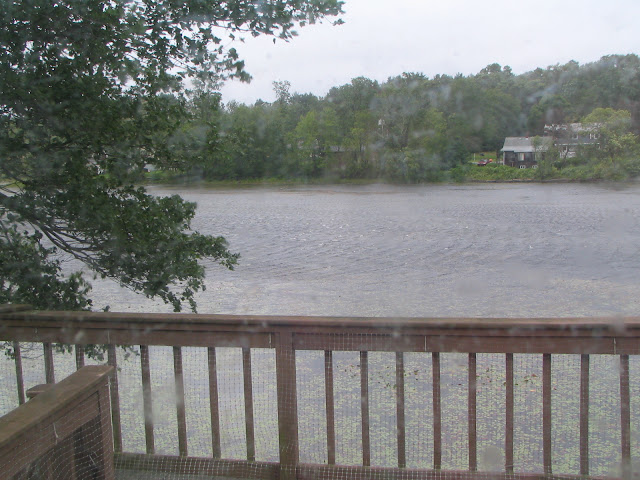 Our morning began with a hummingbird flying in front of our sliding door, perhaps hoping that our living room would provide safe haven during the storm.  At that juncture the wind was starting to kick up along with intermittent driving rain.
I've always enjoyed watching the patterns of ripples or waves caused by the swirling winds on our lake.  I don't know what it is about it, but I find it kind of whimsical, and I am thoroughly entertained by it.  Now don't get me wrong, having lived on Cape Cod all my life I have witnessed the tremendous power of the raging Atlantic.  I understand that is just a glimpse of God's power and I am totally awed by it.  That being said, even the midst of Irene, I experienced something different.  Something unexpected.  I experienced the peace of God along with an invitation to come and sit in His presence.
We lost power around 9:30 in the morning.  That removed all the electronic distractions that invade my spirit.  I could no  longer watch endless loops of hurricane reports.  There would be no views of newscasters standing near sea walls telling viewers not to venture near the sea walls like they were doing with the ocean waves roaring in the background.  There would be no viewing the circular patterns of the hurricane on the weather channel's radar.  No internet.  No checking email.  No Red Sox baseball.  Rather I was given the opportunity to observe the reality of my immediate world around me in the "quiet" of a hurricane!  It was a Sunday without church responsibilities.  It was an enforced Sabbath.
I realized I've never done Sabbath very well.  For years I've carried several responsibilities at church.  Even though I have been deeply blessed, at times it has felt like a second job.  But this Hurricane Irene Sunday would be different.
There were a couple of things that I observed and kind of marveled at.  One was that all the wave action and current seemed to go upstream on our river fed lake.  It was like God was saying, "I will do the unexpected, like part the sea so my people can safely cross."  Another thing I observed was that while all the other wildlife we enjoy on the lake took shelter, the ducks seemed completely unfazed by all that was going on around them.  They swam, they flew, they spent the day feeding in the lake in front of our apartment.  What makes them so different from all the other fowl on the lake?  I just drew a real peace from watching them.  It was like they understood what God meant when He said, "Be still and know I am God."  Or in Psalm 23, where David says, "He leads me beside quiet waters.  He restores my soul."
Noah and his family along with his precious cargo aboard the ark witnessed the complete devastation of 150 days of rain.  Then ...


1 ...God remembered Noah and all the beasts and all the cattle that were with him in the ark; and God caused a wind to pass over the earth, and the water subsided. 2 Also the fountains of the deep and the floodgates of the sky were closed, and the rain from the sky was restrained; 3 and the water receded steadily from the earth, and at the end of one hundred and fifty days the water decreased.
Genesis 8:1-3 (NASB)

Sometimes God uses wind to bring about change.  This was a different Sabbath for me.  I was reminded of how He longs to have fellowship with His children.  I believe He has called me make some changes in my life.  I need to experience true Sabbath more often.