How Jesus Began His Discipleship Ministry

Jesus was the greatest disciple maker who has ever lived. How did He begin? 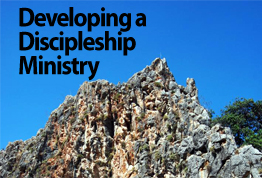 “One of those days Jesus went out to a mountainside to pray, and spent the night praying to God. When morning came, he called his disciples to him and chose twelve of them, whom he also designated apostles” (Luke 6:12,13).

Jesus then selected the men His Father told Him to choose for He only did what He saw His Father doing – Jesus saw these men in prayer and then hand-selected them from the multitudes: "I tell you the truth, the Son can do nothing by himself; he can do only what he sees his Father doing, because whatever the Father does the Son also does” (John 5:19).

Jesus focused His time in prayer, communion and fellowship with His Father and then He selected His men. This is paramount to fulfilling Jesus’ model for making disciples.

Jesus chose a few in prayer, and prayer was His first priority as He continued to make them into life-long disciples.

Jesus focused on a few and He did nothing without first having prayed.

Though Jesus’ vision was enormous, He focused on just a handful of men. In so doing, He demonstrated the power of small beginnings:

“He told them another parable: "The kingdom of heaven is like a mustard seed, which a man took and planted in his field. Though it is the smallest of all your seeds, yet when it grows, it is the largest of garden plants and becomes a tree, so that the birds of the air come and perch in its branches” (Matthew 13:31,32)

Our Lord Jesus focused on twelve men to change the world and to whom He would give the task of building His church. He spent the majority of His life ministry pouring into an obscure, seemingly insignificant group of twelve very unlikely men. As Lord, He knew the power of small beginnings, the power of seedtime and harvest.

What we learn is that bigger and much is not always better. In discipleship, it is better to do more with a few than to do little with many. It is better to have a few very committed people than it is to have an army of mediocrity. We are so programmed to believe that the evidence of a successful ministry is how much, or how big, or how many. We turn to programs again and again that create mechanically produced leaders, but who are not prepared to stand, walk, and engage in spiritual battle. They lack much for they are still entangled in past hurts, offenses, bitterness, divisiveness, not firmly established in the Word of God, and have not learned to walk in the Holy Spirit of God. Too often, they are released to work for Him before they understand their position in Him. Perhaps this is one reason why more than 1,500 ministers leave the pastorate each month.

These first steps are critical in developing a discipleship ministry.