Q & A with Michael Frost Author of Keep Christianity Weird 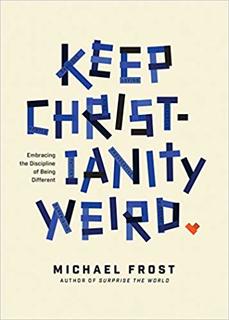 Michael Frost is a leading voice in the international missional church movement. He is author of more than a dozen books, including Surprise the World and Keep Christianity Weird. He is the cofounder of the international Forge Mission Training Network and director of the Tinsley Institute. Frost is a highly-sought-after speaker, traveling internationally multiple times a year.

1. Can you tell us about the idea behind the title of your book Keep Christianity Weird?
We’ve all seen those signs like “Keep Austin Weird” or “Keep Portland Weird”. Those slogans were adopted by cities wanting to stand out from others, to be seen as different, eccentric, weird. It got me thinking. Shouldn’t the church stand out from the world around it? Shouldn’t Christianity be weird or different? Have we become too shaped by safe, suburban culture, valuing privacy and comfort more than eccentricity and difference? The more I researched it, the more I discovered that Christianity is at its absolute best when it’s at its most weird.

2. What does it look like practically to navigate culture without sacrificing our unique character as people of God?
What does it look like? Weird! But not weird in that cringe-worthy “zany Christian” way. I think we’ve been taught to not be weird, to fit in, to be conventional. But the things that make us unique or different are our love for the poor; our commitment to hospitality, justice, and human wholeness; and above all, our off-centered way of loving God.

3. What are some unique characteristics of people of God that should stand out in our culture as “weird”?
The word “eccentric” comes from a combination of the Greek terms ek (out of) and kentron (center). When put together, ekkentros means “out of center”. A more colloquial expression would be “off center.” And when you think about it, anyone who has displaced their own ego at the center of their being and put God there as the center and focus of their lives can rightly be called eccentric. I’m not calling the church to be different for different’s sake. I want us to put God at the center.
Amanda Woods | amandawoods@tyndale.com | 630.784.5125 All NavPress titles are published by NavPress and distributed/marketed by Tyndale.

4. You say that Christians should live opposite of mainstream, just as Jesus did. Can you give some examples from Scripture of Jesus doing this?
Where do I begin? Jesus questioned the status quo. Relentlessly. He accused the religious leadership of Israel of locking the people up in filthy sheep pens and preying on their worst fears, and declared he had come to throw open the gate and lead the people to freedom. Instead of teaching in the traditional fashion, commentating laboriously on the Hebrew Scriptures, he popularized his message by using quaint agrarian stories drawn from the everyday. He ate with Roman collaborators (tax collectors) and those referred to as “sinners.” He taught people how to shame the Romans by turning the other cheek or carrying their pack an extra mile. I could go on and on. Jesus was completely off center, a square peg in a round hole. And those who were most attracted to him were the ones who had nothing to lose— women, children, young fishermen, the poor, the disabled. With this band of misfits and outcasts, he changed the entire world.

5. Do you believe it’s possible to live differently than the world does without being offensive when you don’t agree with the world’s ways? What does this look like?
If we must offend people (and occasionally we will), I want it to be for the right, biblical reasons, not the wrong, cultural ones. The gospel is offensive. Jesus was offensive. To the powerful, to the rich, to those with vested interests, to the religious elite. If we offend those who aren’t willing to relinquish their power, to put God at the center, then so be it. But if we’re seen as offensive because we’re socially awkward, judgmental, sanctimonious, or hurtful, then we deserve all the rejection we get.
6. You say we need renewal from the Spirit to be able to do this. What exactly do you mean by that?
There’s a fine line between being a fractious troublemaker and clearly discerning the Spirit of God, and calling the church to rediscover its vision as a genuinely alternative society. I talk a lot about spiritual renewal in this book because I think that’s absolutely central to discover our calling as God’s people in an increasingly secular society. Only with the Spirit’s guidance can we have our hearts and minds renewed and allow God to replace us at the center of our lives.

7. How can living this way create opportunities to share the Good News of our faith?
Like I said in my previous book, Surprise the World, which is a kind of companion piece to Keep Christianity Weird, the church needs to live a “questionable life,” a life that evokes the curiosity of unbelievers. In this new book, I explore how the church can be an alternative community within society. In a way, it’s about how the church as a whole can live a questionable life. And when people ask questions about why we’re so weird, that’s the perfect opening for sharing the Good News.
Amanda Woods | amandawoods@tyndale.com | 630.784.5125 All NavPress titles are published by NavPress and distributed/marketed by Tyndale.

8. What is your hope for your book Keep Christianity Weird, and what do you hope readers take away as practical action steps after reading it?
When Jesus called his followers together, he gave them a new way of life to live. It was a weird way of living that included forgiving enemies, turning the other cheek, sharing all that they owned, drawing upon the gifts of every member, even the most humble. He gave them a new pattern of relationship between men and women, between parents and children, between masters and slaves. It was a weird new vision of what it means to be human. I hope people will be re-enlivened by this vision after reading my book and will follow the steps I mention in it.