Yesterday I listened, as did anyone in a two block radius of the bank, to a customer's explosive rant proclaiming they wouldn't let him cash a check. On my way home from work, two cars log-jammed in the middle of a 4-way stop with both drivers gesturing their frustration while jabbing their horns. Whew! Rage in action!

Why are people so angry? I wish I knew the answer. My best guess is that most of us think we deserve to be first. Our unalienable right to life, liberty, and… 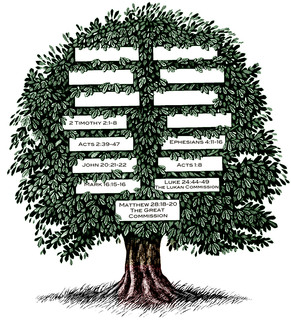 In the midst of chaos, let there be Light!

In the midst of chaos, let there be light!

Is there any lesson in Scripture about a great economic crisis that afflicted the known world in biblical times? Yes there is. And the LORD has several lessons for us. There is no problem that man has experienced that has not been known…

“By faith Abraham, when he was tested, offered up Isaac. He had received the promises, yet he was ready to offer up his only son. God had told him, "Through Isaac descendants will carry on your…

What God Thinks about Volunteer Ministry

The local church ministry is a volunteer army. Noah Webster pointed out in his American Dictionary of the English Language in 1828 that a volunteer is “a person who enters into military or other service of his own free will. In military affairs, volunteers enter into service voluntarily, but when in service they are subject to…

Objects that are misplaced can create a frustrating situation. I should know. My Mom was not kidding when she said, "You'd loose your head if it were not attached." However, in the church, people that are misplaced constitute a tragedy. Every believer has the greatest power force in the world and has been gifted for a ministry that will be life-changing for all who are involved. Yet, a careless (or prayerless) decision by a church leader can limit (at best) the potential for a Christian to…

From Tone Deaf to Perfect Pitch

Music is beautiful when there is the perfect balance of a strong melody and a complementing harmony. For two accomplished piano players, whose love for music was stifled by debilitating strokes, this ability to enjoy the eighty-eight keys was severely diminished. Margret was impaired on the left side and Ruth on the right. Yet, the lives of both these women changed when the director of their convalescent center placed them side-by-side on the piano bench. What came from that…

The Holy Spirit AS A Teacher

It is the priviledge of each beliver in Jesus Christ, even to the humblest, to be taught of God (John 6:45).

GOD has no MONEY!

GOD has no money!

“For every beast of the forest is Mine,

The cattle on a thousand hills.…

It seems to me that prayer is an essential element of discipleship; maybe the core component. Without the ability to converse with God, how can any of the other responsibilities of being a disciple have life? Is it possible that so many church-discipled Christians are experts on studying, memorizing, learning, singing, giving but inexperienced in authentic, proactive, world changing praying?


Saw this in ChurchLeaders.com - Stoking Your Passion for Prayer @http://tinyurl.com/3cz5dhh