“Because these people approach Me with empty words,


And the honor they bestow on Me is mere lip-service;…

And there is one LORD, one trust, one immersion, and one GOD, the FATHER of all, who rules over all, works through all and is in all (Eph 4:5)

Lessons from a cat

“As the deer pants for the water-brooks, my soul longs for you.


I am thirsty for GOD, for the living GOD!”

Discipleship 101: If Your Brother Sins Against You

How different we would be if we were to follow Jesus' plan for Biblical reconciliation. Disciples must confront each other about their sins privately,
and never engage in or be a party to gossip and tale-bearing. This article provides a step-by-step process "If a brother sins against you."
This should be one of the first lessons taught and lived out by those…
Continue


A friend of mine thinks that we who do ministry need to learn to “spike the ball.” When football players finally get the ball into the end zone, they don’t stand around the goal post looking depressed, grumbling to one another about how many plays they had to run or talking about how they fumbled the ball on first down ten minutes
ago. No! They celebrate!…

Can I Really Disciple Someone?

I remember when I first began to understand that I wanted to give my life helping make disciples. I was introduced to the idea when I was still in high school. I began to grasp it and actually try to do it as a college student. I was captured by the vision of helping young men and women walk with God. It was a compelling life purpose; however, I often felt handicapped because I had never “been discipled.” Then, in my late twenties I went on staff with a collegiate ministry…

Not long ago I opened an e-mail from a young person preparing for baptism. She asked the following question: "How do you explain a God of love destroying the world by fire? Doesn't that seem harsh to you?"

Sitting wordless at my computer, I began to think. Those were good questions, but in my youth I had never thought to ask them. Yet, as an adult, I sensed that at some level they might not be answered convincingly for me either.

I tried to screen out my preconceived reaction… Continue

The emissaries said to the LORD, “Increase our trust.” The LORD replied, “If you had trust as tiny as a mustard seed, you could say to this fig tree, ‘Be uprooted and replanted in the sea!’ and it would obey you. If one of you has a slave tending the sheep or plowing, when he comes back from
the field, will you say to him, ‘Come along now, sit down and eat?’ No,…

“You and Aaron are to number all in Israel who can serve in the army, those who are twenty years old or older, by their divisions. And to help you there is to be a man from each tribe, each man the head of his family. Now these are the names of the men who are to help you…”…

Age should speak; an abundance of years should teach wisdom.


But it is the spirit in a person, the breath from SHADDAI,

The Most Powerful Word In The Bible 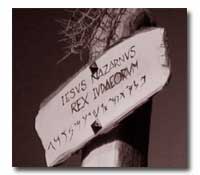 Jesus said: If anyone would come after me, he must deny himself and take up his cross and follow me. (Matthew 16:24)


“The human spirit is a lamp of ADONAI;


It searches one’s inmost being.”


Paul once said, “Who knows the inner workings of a person except the person’s own spirit inside him?”(1 Cor 2:11a) This is true of every person who has surrendered all of himself to the LORD because only those who belong to GOD are
truly…

The LORD gave us brains...

“One who doesn’t think believes every word, but the cautious understands his steps.”

Just need to be fed? Grow up!

Tomorrow our family will gather, like most of yours, to celebrate Thanksgiving. I'll be giving thanks for many things this year, but one of the tops is for my kids.

I'm particularly thankful that not one of my kids will ask me to cut up their turkey for them or feed them their cranberry sauce tomorrow. In fact, the girls are ready to help prepare the meal. We won't have any babies with us this Thanksgiving, but if we did, they could feed them their Gerber Turkey and… Continue

I just need to be fed.

I love hearing people say this when they are very young followers of Christ. Babies need someone to feed them. My role and responsibility as a mature follower of Christ in the church (and by that, I mean the body of Christ, not an institution) is to help feed those babes in Christ.

I despise hearing people say this when they are mature followers of Christ. And… Continue

I once tried ice skating. It didn't go so well. I once tried the trumpet. No so good either. I have tried to grow watermelons in my garden. Vines look great but nothing remotely edible makes an appearance. After going to the pet store four times and replacing ten Africa Dwarf frogs (aquatic frogs for a fish tank), I gave up on the amphibians and bought a betta.… Continue

Ministry is really not rocket science nor is it complex. At least it does not have to be. Over the last few years, I have read a couple of bookshelves worth of books on church leadership. Everyone has a theory about how to get people involved in ministry and how to keep them there. There are no lack of strategies and advice in the Christian bookstore.

What if the process is very simple? What if God just gave us a gift for ministry and then provided a place for us to use this gift to… Continue