Whose Job is it to Make Disciples?

Recently, I had the opportunity to attend a training conducted by Jeff Sundell, founder of the new 50-5-50 Network and the new National Director for e3 USA, an initiative of e3 Partners.This training has me thinking, what is necessary to make disciples in the USA.

Jeff was with the IMB for more then ten years and saw a disciple-making/church planting movement rapidly spread through Nepal to involve 10,000s of house churches. After returning home and not content to simply be assimilated into the American Church scene, Jeff is now leading a vision to see disciple-making movements started in 50 of the largest USA cities, deploying the same disciple-making methodologies he used in Nepal. This is what some know as the T4T or Four Field model. You can learn more about this at T4TUSA.com. Jeff is just one among a growing group of practitioners to these principles.

At this recent training, I was challenged with this question: "Whose job is it to make disciples?"  According to Jesus, in his  Great Commission  (Matthew 28:19-20), the job belongs to everyone who would follow him. According to Jesus, all who would follow him have been called to make disciples! Isn't that awesome!? The first challenge  however is that in the USA, and elsewhere, the job of making disciples is often left to the professionals, seminary trained pastors. This leads to the second challenge, which is that all indications are that we are not really making disciples the way Jesus taught.

But what does it mean to make disciples? The way I would answer that question is this: Following Jesus example, by living for God's purpose for the knowledge of his glory in Christ to be known among the nations and teaching others to do likewise by our example (John 17:1-4).  We are called to reproduce ourselves until the knowledge of God's glory fills the earth. For that to happen, it is necessary to flip our existing disciple-making paradigm.

Below is an illustration of what I mean, not my own but something that Jeff taught, I simply reformatted it. If Jesus had in mind that all who would follow him would make disciples, how do we flip the existing paradigm that has produced our current lack of disciple-making in the Church? For starters we can learn from what's happening in areas of the world that are witnessing disicple-making movements and apply similar principles here. Since the principles are right out of Matthew 10 and Luke 9 and 10, they should work here as well.

How would you answer this question? 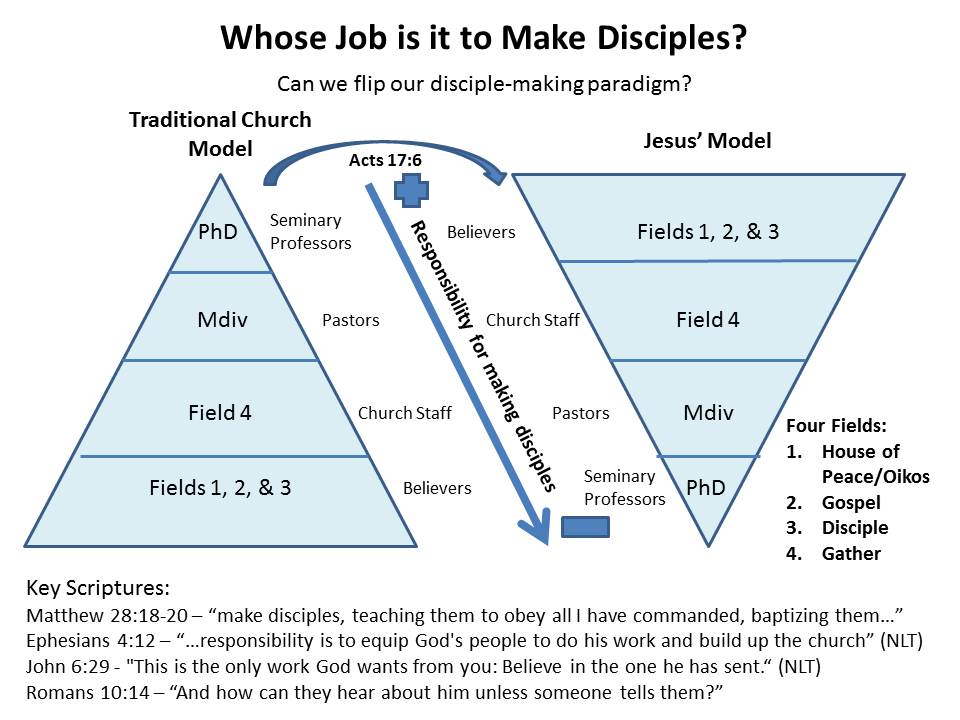 I agree, disciples are more than just "nice people."  They are people on-purpose for the advancement of Christ's kingdom into all the nations, world evangelization through the strategy of spiritual multiplication of disciple makers.  Not professionals but intentional and committed.

Comment by Michael Dugan on March 20, 2014 at 10:38pm
I like the graphical representation you have presented. My opinion is it is the duty of ALL believers to disciple no matter what position they hold in life.